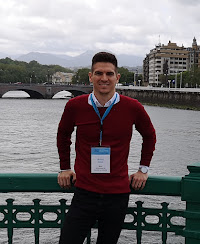 Josué Muñoz Galindo was born in 1995 in Ciudad Real (Spain). He obtained his Chemistry Degree in July 2017, at the University of Castilla -La Mancha (UCLM).

In the last year of his degree, he started to work in a research group, on the field of Nanochemistry, with the project “Synthesis and characterization of 1,3,5-triazine derivatives with gels properties and as ratiometric sensors” under the supervision of Porf. Ana María Sánchez-Migallón Bermejo and Prof. Antonio de la Hoz Ayuso. Also, he successfully defended his final degree project titled “Environment and biodegradable polymers” supervised by Prof. Ana María Sánchez-Migallón Bermejo.

The following year, he obtained his Master´s degree in Chemistry Research, with a project titled “Novel hydrogels based on triazine as Fe(III) sensors”, in MSOC Nanochemistry group, under the supervisión of Prof. Sonia Merino Guijarro and Prof. Ana María Sánchez-Migallón Bermejo.

In 2018, he began her PhD in Chemistry titled “Design of graphene hybrid gels for culturing cells” under the supervision of Prof. María Antonia Herrero Chamorro and Prof. Sonia Merino Guijarro.