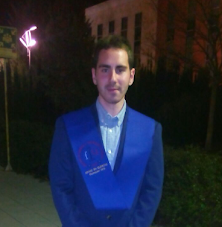 Jesús Herrera Herreros was born in Ciudad Real in 1993. He achieved his Science Bachellor´s Degree in 2011 at Hernán Pérez del Pulgar High School.

His vocation on Chemistry brought him to develop his career on University of Castilla-La Mancha, getting his Grade on Chemistry in 2015, with quite good results. Meanwhile, he obtained a Santader´s grant for working on practices at Cervecería La Mancha S.L. for 6 months. Then, he was formed as a High School teacher by achieving a “Máster Universitario en Profesor de Educación Secundaria Obligatoria y Bachillerato, Formación Profesional y Enseñanza de Idiomas” in 2016.

This year, he worked at Colegio Virgen del Prado (Marianistas) in Ciudad Real during summer. Next year, he began his PhD in Chemystry Researcher on the Microwave´s and Green Chemistry Group, led by María del Pilar Prieto Núñez-Polo, and also working with MSOC group (led by Ester Vázquez Fernández-Pacheco) on the synthesis of Magnetic Hydrogels for culture media systems, till now.