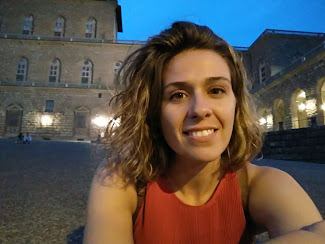 Ana Martín Pacheco was born in 1991 in Los Navalmorales, a small village in Toledo, Spain. She obtained her Chemistry Degree in June 2014 at the University of Castilla- La Mancha (UCLM).

In October 2013, during the last year of her degree, she began work in a research group, working in the “Preparation of Graphene Quantum Dots (GQDs) by Mecanochemical Methods and Tuning the GQDs Solubility and Its Sensing Abilities by Funcionalization” under the supervision of Prof. Enrique Díez Barra, in Microwave and Sustainable Organic Chemistry Division.

From November 2014 to September 2015, she started to work as researcher (R&D Project) in two different projects: “Emerging Technologies. Development of New Methodologies and Applications in Materials and Supramolecular Chemistry” and “Applications of Microwave Radiation in Organic Synthesis. Reactivity and Selectivity”, both in MSOC Nanochemistry group.

In Septembre 2015, she got a “University Professor Formation (FPU)” fellow from the Spanish Education Ministry to initiate her PhD in Chemistry. Actually, she is doing her thesis titled “Preparation of Graphene Quantum Dots for the synthesis of smart hydrogels” in MSOC Nanochemistry group, under the supervision of Prof. Ester Vázquez Fernández- Pacheco and Prof. Maria Antonia Herrero Chamorro.