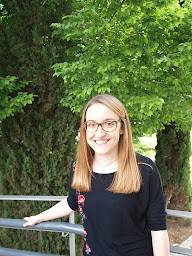 Alicia Naranjo Chacón was born in Bolaños de Calatrava in 1995. She is in the last year of her Chemistry Degree at the University of Castilla-La Mancha (UCLM).

In September 2016, she started to work in a research laboratory for the first time performing the project “The Role of the Carbon Nanomaterials in Hybrid Hydrogels” under the supervision of Prof. María Antonia Herrero Chamorro and Prof. Enrique Díez Barra.

One year later, in September 2017, she began her final degree project titled “Design of a set of inks for 3D Printing” in MSOC Nanochemistry group, also under the supervision of Prof. María Antonia Herrero Chamorro and Prof. Enrique Díez Barra.